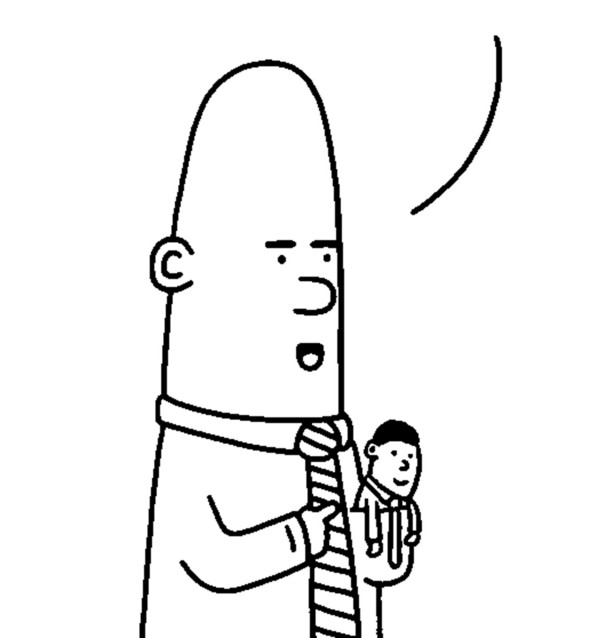 My Dilbert strip on Friday got the lowest reader rating ever: 2.5 stars out of 5. Part of the problem is that the published size of the so-called art was too small for you to see what was in the CEO’s ’s shirt pocket.

Here’s a zoom on the CEO. He has a tiny regulator in his pocket. Try to imagine that the CEO’s shirt has a trap door in the back of the pocket so the regulator can turn around and get a snack whenever he wants. It’s efficient.

Yes, I get it. The comic still blows. It’s gross. It’s uncomfortable. It doesn’t feature the stars of the strip. The phrase “in his pocket” isn’t familiar everywhere.  I got a lot wrong on that one. But what I mostly got wrong is ignoring the Artist’s Secret.

I learned the Artist’s Secret in 1993. It was the first year that I included my email address in the spaces between Dilbert comic panels. Thousands of messages a day poured in. Readers told me what they liked about Dilbert and what they hated. In time I discovered a pattern that confirmed something I had heard from the Ancients but had never understood. (Okay, I heard it from one cartoonist. But he was old and hugely successful.)

The Artist’s Secret is that all art comes from abnormal brains. So if you create art that satisfies your own tastes, you have created for a market of exactly one abnormal person. If you’re lucky, a handful of other freaks get some joy from your creations too. But it won’t be enough to pay your bills. It’s not a career until you learn to create products that normal people like.

A lactating CEO with a tiny regulator in his pocket appeals to my own abnormal brain on every level. That should have been my first clue that it wasn’t the sort of comic that would appeal to most readers. In retrospect, it’s obvious.

I’ll try to do better.