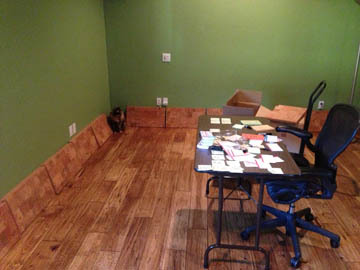 My supply of self-sticking cork tiles arrived. Here they are staged in my movie writing room. I hope to have them up on the wall soon so I can start engineering the Dilbert movie script using note cards and pins.

(That is my giant cat Zoey in the corner)

Yes, I have heard of computers. And when they make a computer screen that is three-walls-wide I will be all over it. What I am doing is building a 3D augmentation for my own imagination. My imagination is commercial grade but I can’t hold a two-hour plot with multiple subplots and characters in my head while I simultaneously write and edit the story in my mind.

Someone asked me in the blog comments how hard it is to write a movie script when I already have experience writing the Dilbert animated TV show. My answer is that comparing a 21-minute TV script to a two-hour feature film script is like asking a taxi driver to fly a 747. The skills aren’t directly transferable.

For a good idea how hard it is to write a 21-minute animated TV show, see this great description of how The Family Guy writers create scripts. It takes a room full of people and a year of back and forth for each script. To put it another way, one of the most successful shows on television can’t hire an individual who knows how to write an entire script for one show. And as the article explains, many other animation writers think The Family Guy produces some of the worst scripts on television. I enjoy the show but it does have the worst writing I have ever seen on a successful show. Like most people who enjoy the show, I respond to the irreverence. So in a sense, the entire show is one joke (irreverence) retold in infinite ways. And it still works.

My experience with the Dilbert animated TV show was sort of the low-budget version of The Family Guy’s system. My co-executive producer, Larry Charles, and I would brainstorm story ideas and assign a story to a writer or a team of two writers. Most of the first drafts were nearly unusable. I tossed some first drafts in the garbage and had to write new ones from scratch. Then Larry would do his edits and after a few rounds of back and forth we had something. Sometimes we did the entire process in a week. Sometimes Larry did the first draft after throwing away another writer’s draft. Thanks to union rules, the writer of the first first draft is the official writer of the script, and that person gets paid royalties while his work heads to the landfill. Larry and I would get secondary credits for “helping.” When people ask how much I liked working in television, I tell that story.

You might wonder why we didn’t hire writers that could create final scripts, or something close to final, on their own. Personally, I have never met a person who could do that for a humor scripts, and I’ve looked for years. I assume The Family Guy can’t find that person either. So they have a room full of writers and a yearlong process that creates scripts by committee. And the scripts play like committee work.

The Simpsons has a similar writing system I believe, and often produce brilliant scripts. I assume the writers for The Simpsons are just smarter. That’s what I hear. I can’t confirm it.

In my day job, I write one or two jokes per day for the Dilbert comic. A film script would need about three laughs per page for 120 pages. That’s 360 humor moments, overlaying a fairly specific movie script formula, overlaying a story that has to make sense from start to finish and deliver an emotional payoff. That’s a tough ask for one writer.

Anyway, my point today is that writing isn’t just about talent and hard work. You also need a system that makes sense for the project. My writing room is the first part of developing my system. As the project progresses I will look for helpers on specific elements of the script, such as checking the technology assumptions and updating the business jargon. And I’m sure I will need what they call a “script doctor” to fix the broken parts at some point. And if a director gets involved, he or she will want to do some rewrites too.

Writing is complicated. If you plan to write something, solve for the writing process first.