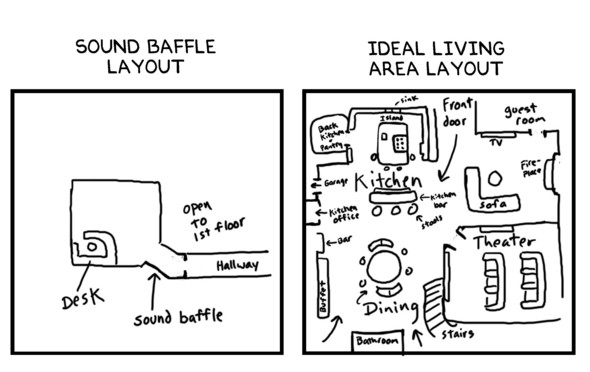 We’ve lived in our new home for several months now, and I’m ready to render my verdict on what design elements worked.

My home office is designed with a sound baffle. It’s a 10-foot diagonal hallway between my office door and the main office space. It’s a kill zone for sound waves, and it works like a charm. The house has no carpets, so sound carries, but none of it makes it to my desk. The master bedroom has the same feature.

We put our home theater in the same general area as the kitchen and family room. It seats ten, which makes it cozy enough for general TV viewing. Now that most TV shows are HD, the big screen gets used every night. If the theater were in the basement or the far end of the home, as is often the case, it would feel lonely, and only get used for movies.

The theater has a double door with a large glass oval in the center. It doesn’t let much light in, and you always feel visually connected to people in the kitchen when you’re in the theater.

Being near the kitchen gives you convenient access to the microwave and refrigerator. The theater is soundproofed with acoustic wall panels, so you can be blasting a movie without interrupting conversation in the kitchen. It works in reverse too. If you want to escape the noise in the rest of the house you can leave the theater sound off and be in complete silence.

The living room has its own largish standard TV. That allows us to entertain around special broadcasts such as the Super Bowl or the Academy Awards. The hardcore viewers use the theater while the chit-chatters mingle in the living room, near enough to each other that there’s a flow back and forth to make you feel connected. And both rooms open to the kitchen where people inevitably congregate, so the three spaces act as one for entertaining. (There’s a small TV in the kitchen too.)

One mistake you see in a lot of new homes is a fireplace and a TV on the same wall. From a design perspective, the two rectangles compete. The worst solution is putting a TV above the fireplace. You have to crane your neck for viewing, and it always looks like you couldn’t make up your mind what should be on that wall.

Our TV and our fireplace in the family room are on adjacent walls, so each wall has its own focal point. The L-shaped couch has one section facing the TV and the other facing the fireplace. It’s the only configuration that I can imagine looking intentional.

Our phones double as microphones for a whole-house public address system. Hit a few keys and your voice booms through the ceiling speakers throughout the house. It gets used all the time.

The cat box has its own space off of the laundry room, with a bathroom fan. It’s out of sight and still convenient enough for cleaning.

We designed an under-counter space for a kitchen utility cart. When you want to clean up after dinner or entertaining, you wheel out the cart and pile on the debris for a convenient trip to the dishwasher.

Our kitchen has three separate recycling and trash drawers, forming a triangle in the kitchen space. About half of all kitchen trips are to the garbage/recycling. This way you’re always near one, and you rarely have to scoot someone out of the way to get to it.

Relative to the cost of a kitchen, microwaves are inexpensive. So we included two in the design, plus a convection oven that doubles as a third microwave. We use two or three of them at the same time quite often. It’s a great convenience, especially on movie night when popcorn is in high demand.

We have two dishwashers. The new ones are so quiet that you can’t tell if they are running. For the price of a second dishwasher, the extra convenience is extraordinary.

Obviously the kitchen is large. We assumed it would be the most used area, and it is. The center is an oversized island with seating at one end, stove in the middle, and a second prep sink. The design attracts people to gather around it, either chatting or helping, and the hostess is facing the guests while cooking.

We made room for the oversized kitchen and the theater by leaving out rooms you normally find in a home. We left out the fancy foyer, formal living room, and formal dining room. Our dining table, which hasn’t arrived yet, will float just off the kitchen and double as the main thoroughfare for the downstairs. That way we avoid extra walls and hallways that ruin the flow of a house.

Those are some of the design elements that worked well. (Sorry, no pictures. It’s still a private space.)

Update: Several of you asked to see a sketch of what the sound baffle and an ideal living area layout would look like. This doesn’t match exactly our layout, but gives you the general idea of flow and placement.