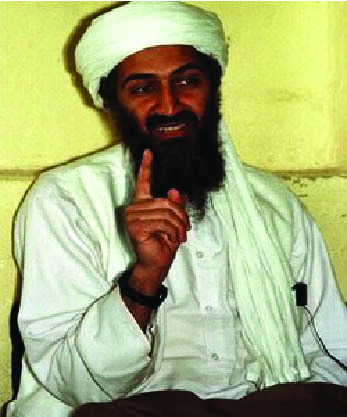 Let’s see if you can solve this puzzle. We’ve learned that Osama Bin Laden’s compound had marijuana, pornography, and some sort of herbal Viagra. He had no air conditioning to keep him cool in the blistering heat of summer, and no heat to protect him from the cold of winter. He had no phone and no Internet connection. He had a home office and three wives living with him. Using only these clues, help the CIA solve the following puzzle: Why didn’t Bin Laden come up with any good plans lately?

I’m no expert on terrorism, but I do have a few ideas about Osama’s lack of productivity. Let’s start with the fact that every time Osama had a few minutes of quiet time – and he wasn’t stuck to the floor – he was spanking the martyr like it was his job.

The official story is that we found Osama by identifying his courier. I think a more likely scenario is that the CIA got a tip from whoever’s job it was to clean Osama’s room. I imagine that the end of that conversation went like this. “I don’t want the reward money. Just make it stop.”

Is it any coincidence that all of Osama’s targets were shaped like penises? He started with jets, towers, and ships. Then he moved on to trains. Maybe we can save some money by eliminating security at anything that isn’t shaped like a dick.

The marijuana at the compound explains a lot too. When we see pictures of other terrorist leaders, they always look angry. Every time we see a picture of Osama, he’s just chillin’ with his homeys. Here he is asking for some curly fries.

I wonder how stoned you need to be before you come up with a plan to conquer the planet using nothing but bearded men as weapons.  I have a feeling that plan B involved showing up at the Grammy’s inside a giant egg. It’s obvious that he wasn’t a beer drinker because his most ambitious plot didn’t involve sneaking up on camels and tipping them over.

We have this image of the World’s Biggest Terrorist being sort of a king in his castle. But I’ll bet it didn’t work that way. If you’re a 6’8" guy with three wives, someone is asking you to reach a high shelf every three or four minutes. I have a hypothesis that the whole terrorist mastermind thing started because there aren’t any golf courses in that region and Osama needed an excuse to get out of the house. We’ve been told that he didn’t have a phone because he wanted to avoid being located by the United States military. But if you had more than one wife, you’d toss your phone in the nearest dumpster too. My point is that it’s not all about us. His personal life was complicated.

Now imagine that you have no phone and no email and you want to communicate a complicated plot to your henchmen around the world. You have to rely on your courier to remember the message and deliver it in a persuasive manner to your operations guy. If you have ever met a human being, you know we’re not good at transmitting simple messages from one person to another. Now imagine that the courier was probably the guy tending the marijuana garden and you see what I’m getting at here. I’ll bet a lot of those conversations went like this.

Courier: Osama wants you to bomb the embassy on 4/20.

Courier: That’s an awesome question. I’ll have to get back to you.

Courier: All I remember is that the target is shaped like…this.

Terrorist: Get out of my tent.