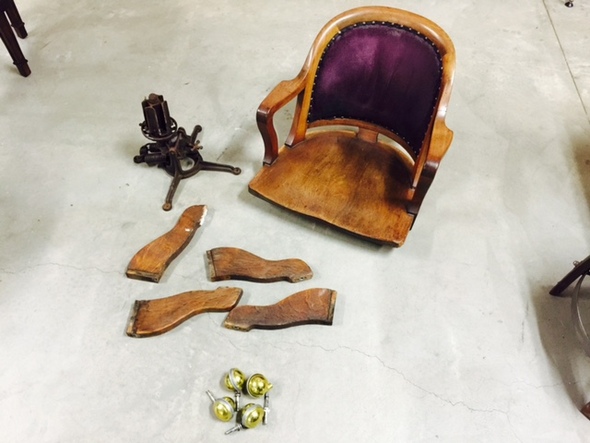 When I was 12-years old, my mother and I worked together to build a chair out of parts from other chairs. It was our little mom-and-son project. We took the top of an old painted chair with legs and attached it to the swivel bottom from a different chair. My mother reupholstered the back and I refinished the wood and added new wheels.

We did not possess any of the skills necessary to make a new chair from old chairs, and the result showed. The caster wheels would often fall out. The chair was wobbly and unstable. To an unfamiliar sitter it was a death trap.

And it was my most valued possession.

When I went to college, I took only a trunk of clothes, some toiletries, and my chair.

I sat in that chair every day of college, trying to be the first in my family to graduate with a 4-year degree. My mother was raised on a farm. She became homeless as a teen when her mentally ill father chased her and her mother away at the threat of death. They left with the clothes on their backs, running for their lives. They made it to town on foot. A family took them in and they rebuilt.

My mother was engaged to my father at sixteen and married at eighteen. She was twenty when I was born. And she had something to prove.

From my earliest memories she drilled into me some basic facts about my future:

She didn’t have to teach me that I shouldn’t give up when things get tough. I simply never saw anyone give up about anything when I grew up. Giving up wasn’t even a thing. I didn’t know people gave up on things until I got into college.

After college I moved to California to start my life. I took two suitcases with me. But as soon as I was settled I had my chair shipped out. I sat in that chair every day, planning my future, sometimes doodling.

Eventually my chair succumbed to age and it became too dangerous to sit in. I moved it to a storage room and replaced it with a fancy office chair.

Last week my parents’ estate finally got settled. My mother passed first, a few years ago, and as these things so often go, my father slid downhill fast and joined her. When the final distribution checks arrived to the three siblings, I emailed my sister in New York and my brother near Los Angeles to call out something extraordinary: The three of us had navigated the distribution of the estate, and a million decisions, (with my sister in the lead) without a single disagreement. Not one. If you have witnessed sibling behavior during this sort of situation, you know it is unusual to have no disputes. Sometimes you don’t know what your parents taught you until you DON’T have a problem. I was deeply impressed with whatever they did to make the three of us so reasonable.

And so I pulled my old chair out of storage. I couldn’t quit on it. I don’t know how. I also don’t know how to restore iron, refinish wood the right way, or attach new wheels to over-sized and worn-out caster holes. But I will learn. And when I’m done, the chair will be better than it ever was.

I had held off from updating the chair because I wanted to keep it exactly as it was, to keep the memory alive. But I remembered how my mother thought, and I know she wouldn’t have approved of an old chair that wasn’t useful.

This one’s for you, Mom.